Some Sarknatives are obviously angry with their boss, Sarkodie about his way of handling his marriage.

An angry fan of Sarkodie has expressed his anger at the way the SarkCess Music boss handled his marriage ceremony.

Sarkdie got married to his long time girlfriend and Baby Mama, Tracy over the weekend.

However, as has become very typical of most celebrities, the wedding was strictly by invitation.

That aside, there was a delay in the release of official photos from the ceremony for the fans to also glance at.

After several hours of delay, Sarkodie posted some photos of his marriage with the caption; “As intimate as I want it, My fans deserve to see these priceless moments in my life, Thank you”.

A Facebook user, with name Ofori-Krah Arabio however got angry and decided to tell Sarkodie his mind.

Ofori-Krah Arabio, replied; “Next time when you are set to release an album, make sure you invite all those who attended the wedding and launch it with them privately like the wedding. Let Strongman be the MC. You can’t take we ur fans for granted”.

We cannot establish whether Ofori is a true Sarknative or not, but from all indications he didn’t like the way Sark handled this ceremony.

Perhaps, Ofori believes it would have been a bit prudent if Sarkodie had at least invited a few SarkNatives to also have a feel of his much-awaited glamorous wedding.

Check the screenshot below: 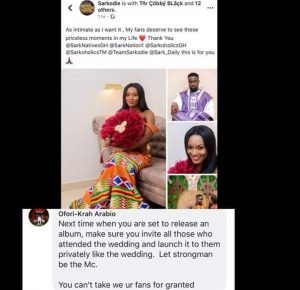 Claims That Some Musicians Rely On ‘Juju’ To Produce Hit Songs Is Bogus — Magnom
Kanye West: I Want to Kill Myself Sometimes!

“For Just Slapping My Mother-in-law, Look At What My Husband Did To Me” – House Wife Cries For Justice